Friday, December 2
Trending
You are at:Home»Economy»UNEMPLOYMENT IN KENYA.

The Long Road to Recovery.

It is critical that Kenya continues to implement medium-term fiscal consolidation plans.

Africa has the youngest population in the world. The continent’s median age is 19.7 years. A youthful population denotes an abundant and energetic workforce. This should ordinarily be a driving force for the economic growth of any region. Unfortunately, this is not the case in Africa. Grim employment prospects continue to snuff out the continent’s potential.

A study carried out by the African Development Bank in 2015, revealed that one-third of Africa’s population aged between 15 and 35 were unemployed, another third were vulnerably unemployed, and a mere 1 in 6 was in salaried employment. Employment is largely informal in Africa, and Kenya is no different. Agriculture is vital to our economy.According to the UN’s Food and Agriculture Organization (FAO),the sectorcontributes 26 per cent of the Gross Domestic Product (GDP) directly, and another 27 per cent indirectly through linkages with other sectors.

The sector employs more than 40 per cent of the total population and more than 70 per cent of Kenya’s rural population.The unemployment rate is an indicator of the underutilization of a country’s labour supply; it reflects the incapacity of an economy to generate jobs for individuals who are actively seeking them.While the definition of unemployment is straightforward, economists divide it into several different categories.

The unemployment rate can never fall to 0%. Frictional unemployment comes about when workers leave their jobs in search of new ones or when they’re entering the workforce for the first time.

Cyclical unemployment occurs due to a downturn in the business cycle or a recession. Businesses hire fewer new workers and might be forced to downsize by laying off existing staff.

This type of unemployment happen because though jobs are available, there’s a mismatch between the skills companies require and what the labour force can offer.

Unemployment in Kenya A report by the National Treasury towards the end of 2020 estimated that at least 740,000 people had lost their jobs since the first cases of the virus were reported in the country. These job losses adversely affected key sectors of the economy. During the period, the number of employed Kenyans dropped to 17.4 million, down from 18.1 million; this is a huge decline, by any standards.

Strict movement restrictions and other measures undertaken to curb the spread of the virus brought about reduced demand for goods and services in most sectors. According to www.statista.com, in 2021, the unemployment rate for persons between ages 15-64 increased in the first quarter to 6.6 percent against 5.4% in the previous quarter. This was significantly higher than the first quarter of 2020 where a figure of5.2% was recorded. Here’s a graph showing the unemployment rate from 1999-2020 for individuals aged 15-64. 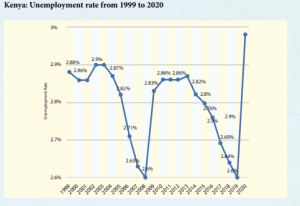 Since the onset of the pandemic, the creation of new jobs in the economy has been quite low. Many workers simply stopped actively seeking employment. Evidence of this can be found in the Labor Force Participation Rate (total number of people who supply labour for the production of goods and services

during a specified period). This figure has been dropping steadily since 2016 Business cycle contractions brought about by Covid-19 resulted in reduced macroeconomic activity and this brought on cyclical unemployment.

The pandemic brought about a decline in aggregate demand across the board. Households, private enterprises, the government and foreign markets had to scale down expenditure on goods and services. This in turn increased unemployment because there was reduced output in the economy. Facing reduced revenues, firms had no choice but to cut down on costs by laying off employees. By adopting certain economic practices, this upward trend of cyclical unemployment can be reversed.

A study carried out by the African Development Bank in 2015, revealed that one third of Africa’s
population aged between 15 and 35 were unemployed, another third were vulnerably unemployed,
and a mere 1 in 6 was in salaried employment.

Reduced demand for goods and services that leads to unemployment can be avoided by adopting demand-side economic policies. The government should focus on increasing output. The best way to do this is by
stimulating demand. The ultimate goal of expansionary monetary and fiscal policies is to bolster aggregate
demand by reducing interest rates and taxes. These policies focus on helping consumers to maximize their income, so they have enough resources to spend on goods and services. Policy makers could also depreciate the exchange rate so as to boost export demand.

The purpose of expansionary fiscal policy is to increase government expenditure while lowering taxes in order to manage output and employment. Lower tax rates result in more disposable income and more consumption. An increase in consumption leads to a rise in aggregate demand and an ultimate rise in GDP Firms will boost production in response to growing demand and GDP, which will necessitate additional labor. As a result, cyclical unemployment will be reduced. Furthermore, when there is significant economic growth and stronger aggregate demand, employment losses are reduced since companies stay in business.

John Maynard Keynes, was an English economist whose brilliant ideas essentially changed the theory and
practice of modern macroeconomics as well as the economic policies of governments. He advocated for the
adoption of expansionary fiscal policy during recessionary periods. According to Keynes, during a recession, there are idle resources—capital and labor. As a result, it is the government’s responsibility to increase demand and intervene to alleviate unemployment. When interest rates are low, exchange rates are low and this in turn makes a country’s exports more affordable and appealing.

In order to reduce unemployment and improve output, policymakers may establish specific initiatives that target specific segments of the economy. Streamlining the clearance process for government projects that provide businesses with cash incentives for hiring people and paying firms to train workers to fill certain occupations are just a few examples of these programs.

What is the government doing about unemployment?

The government is currently focusing on the implementation of the Economic Recovery Strategy (ERS) that aims to restore the economy to a strong growth path by creating jobs and economic opportunities across all regions of the country with a view to tackling social and income inequalities. In May 2020, the President announced his 8-Point Economic Stimulus Programme, amounting to a total of Kes 53.7 Billion to restore key sectors of the Kenyan economy.

These are the major elements of the plan;
The first element focused on infrastructure. The government set aside 5 billion kes to hire local labour to rehabilitate access roads, footbridges and other public infrastructure.By using local labour and construction materials, micro and small businesses received a much needed boost to their bottom line.

The second element was centered on education. An allocation of 6.5 billion kes was made to the ministry of education to hire 10,000 teachers and 1,000 ICT interns to support online learning. The programme was also aimed at improving school infrastructure and supporting local artisans, this included the purchase
of 250,000 locally-made desks.

The pandemic greatly reduced the liquidity of small and medium enterprises. For this reason, the
government allocated kes 10 billion to fast track payment of outstanding VAT refunds. A further kes 30 billion was paid out to clear pending bills owed to road contractors. The president promised to inject kes 3 billion into the SME Credit Guarantee Scheme in order to create affordable credit services.

The government is currently focusing on the implementation of the Economic Recovery Strategy(ERS) that aims to restore the economy to a strong growth path by creating jobs and economic opportunities across all regions of the country with a view to tackling social and income inequalities.

The President announced plans to hire an additional 5,000 qualified healthcare workers. He also allocated kes.1.7 billion to expand bed capacity in public hospitals. The health ministry was encouraged to purchase these beds from Juakali artisans To revamp the agricultural sector, kes 3 billion was set aside for the supply
of farm inputs to 200,000 small scale farmers in order to cushion them from the effects of adverse weather conditions, a further kes 1.5 billion allocated to assist flower and horticultural producers to access international markets. These interventions were aimed providing continued employment for thousands of
workers in farming communities.

Light at the End of the Tunnel

Kenya’s economy has demonstrated resilience to the COVID-19 shock, with output in the first half of 2021 rising above pre-pandemic levels. Data from the Kenya Bureau of Statistics showed (GDP) in Kenya expanded 1.74 percent in the third quarter of 2021 over the previous quarter. The World Bank predicted Kenya’s overall economic performance to grow by about 4.9% this year and its financial experts believe that the country will post one of the stronger growth rebounds in the region this year thanks to diversified sources of growth, sound economic policies and management.

“Recent economic performance has been strong and the outlook is positive, but in Kenya, as everywhere, the future course of the pandemic remains a major source of uncertainty, said Alex Sienaert, Senior
Economist for Kenya. “To support further recovery, reduce debt distress risks, and rebuild space for social and development spending, it is critical that Kenya continues to implement medium term fiscal consolidation plans.”

As Kenya pursues an inclusive and resilient economic recovery, accelerating job creation will be essential. Sustained investment in human capital and social protection is at the center of enabling Kenya’s fast-growing workforce to participate in and drive economic growth.