Sunday, January 16
Trending
You are at:Home»Economy»REFLECTIONS ON THE BUDGET ESTIMATE

The National Budget statement issued to Parliament by Cabinet Secretary for Treasury and National Planning Henry Rotich, in June, was as predictable as it was disappointing to the majority of Kenyans. It was predictable because the Cabinet Secretary, once again, presented an expansionary budget of about Sh3 trillion with a huge deficit estimated at Sh607.8 billion.

Mr Rotich expects to bridge the gap between the expected revenues of Sh2.1 trillion in ordinary revenues and the budget of Sh2.8 trillion with loans from the l o c a — S h 2 8 3 . 5 billion– and g l o b a l — S h 3 2 4 . 3 billion– financial markets. The disappointment arises from the realization that neither the CS nor Parliament has understood the repercussions arising from ambitious budget estimates that are made with figures that are not borne out real life experiences (KRA) continued inability to meet the revenue targets seemingly set by Treasury with either perfunctory consultations with it or none. The result is that Treasury is itself forced to revise those targets, at times, more than once a year. For instance, last December, Treasury cut revenue targets for the current financial year by five per cent from Sh1.69 trillion to Sh1.61 trillion. The previous year, Treasury had indicated that KRA would collect Sh1.499 trillion. However, the CS later revised the target to Sh1.439 trillion. And then, to no one’s surprise, Rotich reduced the target to 1.415 trillion. Yet, despite the reductions, KRA only managed to collect Sh1.37 trillion.

While Treasury reductions to these targets partially shields KRA from much of the criticisms due to its demonstrated underperformance, it does great harm to the economy because this forces a reduction in expenditures usually from the d e v e l o p m e n t estimates. The result is the growing number of stalled projects. As at June last year, the number of stalled projects stood at 545 with an estimated cost of Sh365.9 billion. They currently require about Sh293.4 billion (80.2 per cent of overall cost) to complete.

CS Rotich’s announcement that no new projects would be started until the stalled ones are completed is a welcome one and the hope is that he, and the rest of Government, will walk the talk. But, often overlooked, is the human cost of preparing and presenting budgets that everyone— including the minister, knows will be revised later and setting unrealistic targets. The result is that the officials concerned do not take their work seriously and are not motivated to give the public their best. The shenanigans reported at both the Treasury and KRA could be traced back to the door of this cavalier budget making process which calls for a review, unless of course, the parties involved are happy to continue taking the country’s economy on a roller-coaster. Or how else can a government that launches a transformative Big Four Agenda then fails to adequately provide the funds required be described?

The small amount of money allocated to the agricultural sector is particularly puzzling considering the key role it plays in the country’s economy. The little money—a mere 3.2 per cent of National Government revenues– that was allocated to the sector will be swallowed up in the payment of debts to sugar-cane farmers and in buying grains. Yet, the real driver of the sector (the small-holder farmer) was as usual left to his own devises.

This was a reduction from last year’s equally low allocation of 3.5 per cent to GDP. It’s almost inconceivable that Treasury would allocate such a small amount to a sector that contributes about 34.6 per cent of GDP, directly employs 56 per cent of the labour force and generates 65 per cent of the country’s export goods.

A casual comparison with the European Union where the sector is usually allocated almost two thirds of the budget despite its importance to the regional economy being almost marginal, is a clear demonstration of why there is such a high disparity between the two economies. Even more puzzling, this is the sector that is expected to grow the bulk of the produce that will be processed at the planned factories for the local and global markets.

The apparent bureaucratic lethargy demonstrated in the development of four industrial sites could, therefore, be traced back to the continued underfunding of the agricultural sector. President Uhuru Kenyatta’s first year scorecard on his Big Four Agenda has only Rivatex, a textile making factory based in Eldoret, to show for it. The President is expected to launch the factory in a few weeks and it is expected to employ about 3000 people when fully operational.

The number of out-grower farmers contracted by the factory to produce cotton and the wholesale and retail number of beneficiaries is equally impressive. When the number of households benefiting from the cooking oil produced from the cotton seed and the number of dairy farmers expected to pay lower animal-feed prices because the raw materials are sourced locally is added to the mix point to the type of multiplier effect the government should be investing in.

It is regrettable that the completion of the other two major industrial projects was allowed to stall. Kenanie Leather Industrial Park which was started during the 2014/15 financial year and is based at Athi River together with the much-hyped Naivasha Textile Hub started in 2016 are yet to be completed.

These inexplicable delays have given Ethiopia, a country with a competitive advantage of lower costs in power and labour, a head-start that Kenya may have a hard time overturning. Unlike the agricultural sector, the country’s existing manufacturers can hold a mini-celebration, however, because the CS followed up on President Kenyatta’s earlier directives and they are getting some reasonable breaks. 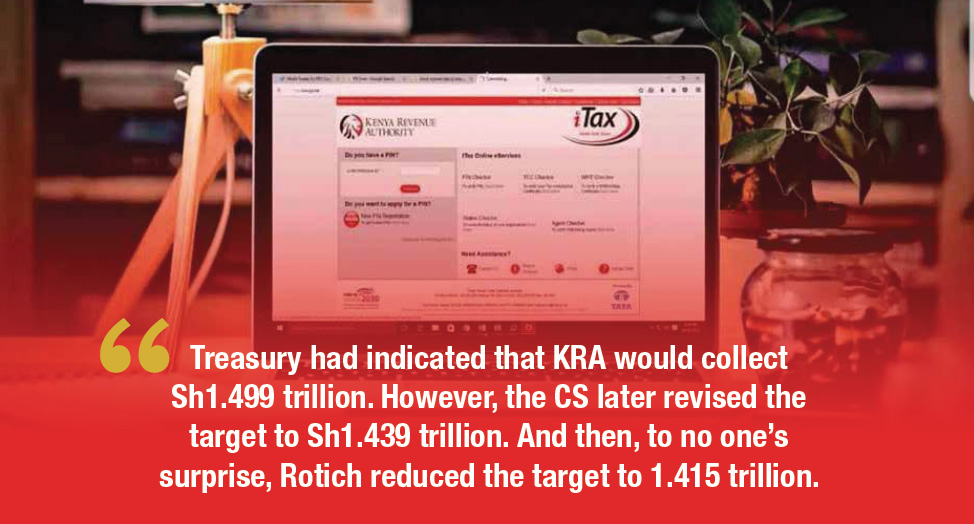 CS Rotich said the Government had taken 12 months to operationalize a 30 per cent rebate on electricity to manufacturers.

“We expect this incentive to reduce the cost of electricity by about 20 per cent and to make our products competitive in the region and this should spur economic growth and create employment for the youth,” Rotich said.

But the CS may be inflating his expectations in this area, as well, because Kenya has lost its competitiveness and market share to China a country that readily and willingly subsidizes its exporters to ensure they do not lose customers. To expect that a little tweaking of the production costs could lead to a drop in prices that could, in turn, stop the Chinese and Indian juggernauts, the sources of most of the region’s imports could be laughable if it wasn’t so serious. The car assemblers are, however, a happy lot following the CSs directive to all government ministries, departments, agencies as well as other public entities to give prioritized procurement of locally assembled vehicles, tricycles and motorcycles.

This may have been a reaction to recent data that showed that sales of new car manufacturers, Peugeot and Voiks Wagen (VW), had failed to meet expectations two years after they made their grand entry into the country despite receiving heavy government subsidies.

Analysts are unanimous in their view that the Government requires to do more than generate policy documents and promise to build Special Economic Zones (SEZs) if it is serious about promoting industrialization.

At the very least, the Government needs to get serious in living up to its promises. In addition, simply putting up the infrastructure and expecting private investors to flock in may be expecting too much in a global environment where developing countries, particularly in Africa are falling over themselves to lure foreign investors. There is need to go beyond the basics to attract the kind of investor who is willing to put money into a long-term venture. Otherwise, only carpetbaggers and other short-term investors looking for short-cuts to make a quick “kill” are likely to show up.

This may explain why the announcement by the Chinese Information Technology giant Huwaei that it would invest a whooping Sh175 billion into Konza City was so well received. The announcement was made during President Kenyatta and Hon Raila Odinga’s recent official visit to China.

It cushioned the blow their hopes of securing further funding for the extension of the Standard Gauge Railway (SGR) from Naivasha to Kisumu was rejected, for the time being. The duo was given conditions under which their request would be considered. In the opinion of the Chinese Export Bank which funded the two earlier sections from Mombasa to Naivasha, the extension to Kisumu would not be cost effective because there wasn’t enough business going to and from the two hubs to pay for its cost.

This is the lesson that analysts thought Treasury had learnt; the need to match investments in agriculture and industry with those being made in infrastructure even in the event that would mean cutting back on allocations to the latter. Belatedly, CS Rotich seemed to have learnt a thing or two for he also announced the formation of a team to assess viability of mega projects before financing them. The CS said this was expected to guarantee that only projects that offer taxpayers value for money are undertaken. He said such scrutiny would save the country from incurring unnecessary debt and at the same time ensure that borrowed funds are prudently used.

Since this is a clear indication that earlier use of public funds was wasteful, logic would dictate that Rotich includes some experts from professional associations in the team scrutinizing the projects to ensure it can withstand political pressure to okay unviable ones. The names of the team could also be publicized to ensure the public has a chance to offer their input on the qualification and suitability of the members.

It would also be prudent to require the Auditor General to carry out audits of the mega projects to determine the value of the work done as payments are made.

Here, too, inclusion of private sector players would be a boon to the taxpayer.