Sunday, January 29
Trending
You are at:Home»COVERSTORY»Demonetization – How will it affect the Kenyan Economy?

How will it affect the Kenyan Economy?

The firestorm generated by Central Bank of Kenya Governor Patrick Njoroge’s announcement at the Madaraka Day celebrations that the old Sh1,000-note will be withdrawn from circulation on October 1 was a surprise because the other denomination notes will continue to circulate alongside the new ones unveiled at the same event in Narok County.
The governor extolled the uniqueness of the new notes saying they have captured different themes and harderto- counterfeit security features. The
new notes have also captured various images—including the iconic Kenyatta International Conference Centre (KICC) and the big five wildlife making them easier to use by the visually impaired.

“The new banknotes bear significant aspects of our nation and like the
coins, will serve as a means of passing knowledge, conserving culture and promoting our global uniqueness,” Mr Njoroge said. “Each banknote has a unique theme to show the richness of our people and nature in our beautiful Kenya. For the Sh50 we have green energy, Sh100 agriculture, Sh200 social services, Sh500 tourism and Sh1000 governance.”

It may be significant that although the planned withdrawal of the old generation Sh1000 notes was met with criticism from the usual suspects—armchair academics and politicians—it was warmly received by the business community. The Kenya Association of Manufacturers (KAM)
and the Kenya Private Sector Alliance (KEPSA) lauded the move arguing
that it would stamp out corruption and eliminate illicit financial inflows into the economy. 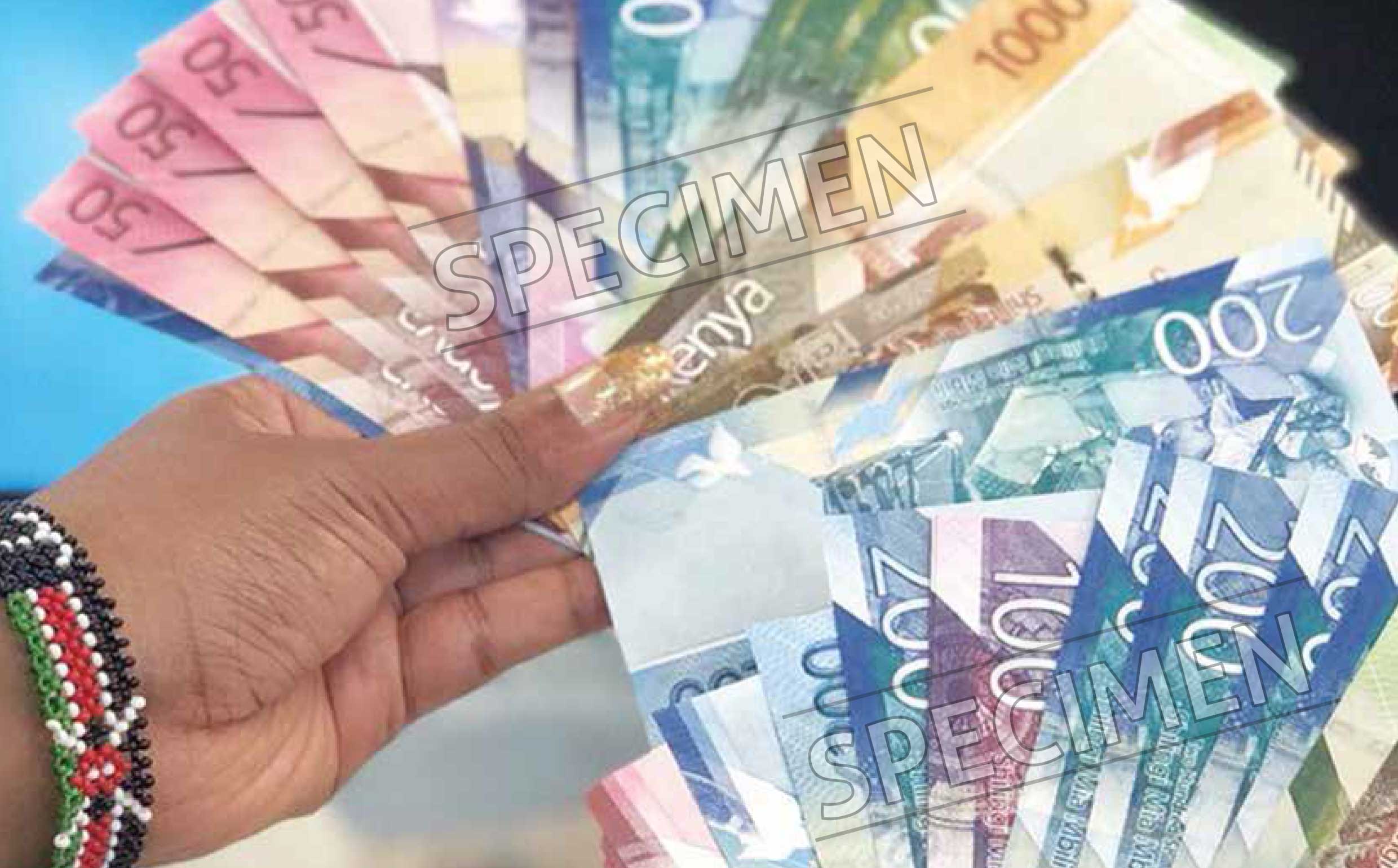 According to a new report released by a high level panel on illicit flows commissioned by the Economic Commission for Africa Conference of African Ministers of Finance, Planning and Economic Development, Kenya lost more than Sh160 billion in illicit finance flows in eight years to 2011.

Nigeria, Democratic Republic of the Congo (DRC), Algeria and Mozambique are the other African countries that have been losing billions of shillings to undeclared taxes, criminal activities and corruption.

But, perhaps unexpectedly, the exercise garnered support from a unlikely corner—the Kenya National Chamber of Commerce and Industry whose
new President Richard Ngatia said the decision to phase out the Sh1000 notes by October 1 will return more money to the country’s economy. He argued, in a live KTN TV interview, that this would give traders easier access to bank loans.

Interestingly, many of the critics of the demonetization exercise have seized the opportunity offered by the inclusion of the late President Jomo Kenyatta portrait that is in front of KICC to take their dissatisfaction all the way to court. The expectation that the recall of the old Sh1000 notes would face some measure of opposition may have informed Mr Njoroge’s repeated assurances that CBK acted with a lot of consideration of the impact an immediate ban on the continued use of old currency notes would have had on the majority of Kenyans.

This was in response to critics such as the former Kakamega Senator Boni
Khawale who argued that the withdrawal of the Sh1000 note targeted “a clique of politicians” who are showing generosity by supporting churches and the needy.

“We are saying that if the withdrawal of the Sh1000 notes will fight corruption, then the government should not wait until October 1. We want it to begin right away.”

It may be significant that although the planned withdrawal of the old generation Sh1000 notes was met with criticism from the usual suspects
armchair academics and politicians—it was warmly received by the business community.

President William Ruto backed the decision to withdraw the Sh1000 notes
from circulation they, perhaps tongue in cheek, argued the recall should have come earlier than October 1.

A little digging into the reasons behind the various criticisms leveled against the phasing out of the old generation Sh1000 notes suggests that they have more to do with the stringent measures to be followed when exchanging the old currency for the new ones than with either its timing or the individual portraits captured in the designs. For example, without a bank account you will not be able to exchange more than Sh1 million of old currency with the new generation notes. In another tough measure meant to shield abuse of the withdrawal process of the old Sh1000 notes from circulation, the Central Bank has directed commercial banks to seek its express approval before allowing such a transaction.

“Any person without a bank account who shall be in possession of currency notes of an amount exceeding Sh1 million shall require the endorsement of the CBK before exchanging the notes,’’ the governor says in the regulations that will guide the process. This will force the individual with such a large amount to open a bank account or lose the money. The import of this measure is that it will be that much harder for those with questionable large amounts to pick people at random to help them clean their money through the financial system.

Even with a new bank account, it will be reported as suspicious if a new account holder suddenly stuffs his account with more than Sh1 million, or seeks to exchange it in cash and walk away without proper dentification on proof of source of the funds. In addition, all currency notes for an amount exceeding Sh5 million will not be exchanged without consent from the Central Bank—the banks’ regulator. This means only those with bank accounts and whose banking history checks out will be allowed to exchange the Sh5 million and below without going have any problems at
the counters.

In response to those calling for earlier implementation of the ban, Mr Njoroge said “we had to benchmark with countries such as India who also withdrew some banknotes from the economy. Theirs was an immediate withdrawal which had some shortfalls.” …“If we had gone the Indian way, people in remote areas would have been affected most for lack of enough time to exchange the notes with new ones,” he said. “The grace period will allow banks and other financial institutions to have enough stock of new generation Sh1000 notes,” Mr Njoroge argued.

A look at the Indian experience demonstrates that Governor Njoroge is right to argue against an immediate implementation of the banning of the old generation Sh1000 notes. Even in New Delhi analysts are agreed that one of the major reasons that resulted in the Indian demonetization exercise of 2016 failing to attain its twin objectives of catching black money and weeding out fake notes was because it was implemented suddenly. According to a paper published by the International Monetary Fund (IMF) chief economist Gita Gopinath and others, the resulting cash crunch
shaved two percentage points off India’s quarterly economic growth.

Micro, small and medium enterprises (MSMEs) were hit hardest as they run out of cash. A World Bank study based on night light data showed that the districts with a higher proportion of the poor and unbanked were hit harder by the demonetization.\

What came as a surprise, however, was that although the exercise was an economic failure, it was a political success. Indeed, a poll carried out months after the demonetization ended showed that a majority of voters supported the ban on the large denomination notes even though they suffered from it. Many voters may have felt that others, wealthier than them, were also being hurt by demonetization.

The results of a second round of YouGov-Mint Millennial Survey conducted early this year suggests that even today many urban youths who support the ruling party consider demonetization to have been a great success of the government. That is a sobering finding that local critics may need to take into account.

To its credit, the local Central Bank seems to have consulted widely before launching the exercise that will have reverberations throughout the economy for years to come. The bank may have been led to do this by the
wide range of missteps that those who carried similar exercises around the
world made when they carried out similar exercises.

A few examples from Africa may suffice”
During the 1990s, the then President Mobutu Sese Seko made some changes with the Congolese currency, ostensibly, to smoothen the running of the economy. The result was a sharp rise in the cost of goods and services
that eventually led to the overthrow of his government.

The process of demonetizing the Nigerian currency in 1984 led to a collapse of the economy which had been suffering years of hyper-inflation and was debt-ridden into the bargain.

In 1982, Ghana demonetized their 50 cedis note in a bid to tackle tax
evasion and drain off excess liquidity from the economy. The people
responded by flocking to the black market and investing in physical assets
which weakened the economy further.

These experiences demonstrate that demonetization alone cannot be expected to achieve the desired objectives as other players in the economy, particularly the law enforcement agencies and the judiciary would need to do their part. The jury is out whether these different players will play their part.