Friday, December 2
Trending
You are at:Home»Governance»AN UNEXPECTED CULINARY DELIGHT IN A HIDDEN BACKWATER

Discover the tranquillity in Lake Bunyonyi

Beyond the Rwenzori Mountains, tucked away in the corner of South West
Uganda between Kisoro and Kabale that borders Rwanda, is Lake Bunyonyi, whose name means

the lake of small birds.

It could as well be called

the lake of small lobsters

because, nobody quite knows when and how, it has also become the expatriate home of the Louisiana Red Crawfish, which is a miniature freshwater lobster in all but name.

Also known as crayfish, the Louisiana Red Crawfish, originating from the Southern United States, is regarded as an invasive species in East Africa, and has caused considerable environmental disruption in many of the
places where it has been able to establish itself, including Lake Naivasha and the Athi River in Kenya, where it preys on indigenous fish species and feeds on the roots of local plants. But while it is regarded by many as a pest elsewhere in East Africa, the crayfish has been accepted as a blessing to the community around Lake Bunyonyi because other fish species have struggled to survive in commercial quantities in the waters of the lake, which because of their extreme depth and tranquillity, have low oxygen
levels. 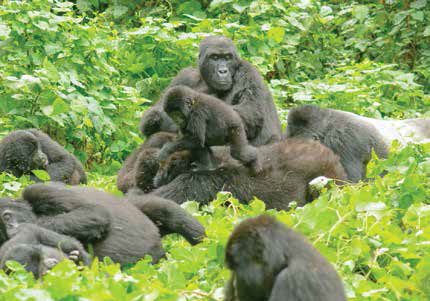 Tranquillity is the biggest attraction of Lake Bunyonyi, which reaches 900 metres in places, making it the second deepest lake in Africa after Lake Tanganyika.
Bunyonyi easily surpasses the depth of Lake Malawi, which is usually ranked after Lake Tanganyika, perhaps because of its larger surface area, which puts it among the Great Lakes. Lake Bunyonyi, which is 25 kilometres long and 7 kilometres wide, is one of the few lakes in the region to be
complete free of bilharzia, making it safe to swim in. Its altitude off 1,962 metres above sea level means that the lake and its environs are cool throughout the day, and perfect for relaxation. And the vista of 29
green islands dotted across the lake create a panorama that few places anywhere in the world can come close to. There is little human settlement on the islands, the best known of which are Akampene, Bwama,
and Njuyeera. 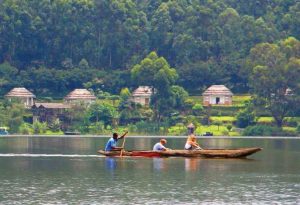 The lake is on the way to the Bwindi Impenetrable Forest National Park from Kampala, and just over the border from the Volcanoes National Park in Rwanda, the only two places in East Africa where it is possible, by booking in advance, to view the endangered mountain gorilla. My own
interest in Lake Bunyonyi was aroused on a flight from Kigali to Entebbe, which took a direct track across the lake, which looked as enchanting from above as it does from its shores. Almost as soon as my flight landed in Entebbe, I was headed back, through Kampala, in the direction from which I had come. The flight from the lake to Entebbe had taken just over 20 minutes, and the journey back by road took all of nine hours, but it was well worth the trip. I stayed at the congenial White Horse Inn in Kabale town, which I learned was the hostelry of choice of Bill Gates when he visited Uganda to track gorillas in Bwindi. However, there is plenty of
accommodation right at Lake Bunyonyi itself, with some of the best places
established by prominent local business people who are proud of their heritage and keen to share it with visitors from around the world. Prices per night for a couple, with breakfast, range from around $70 to well over $250 and most of the lodges, resorts and camps that dot the area
serve wholesome meals to non-resident visitors. The pioneer of serious tourist development in the area was Charlotte Kamugisha, a keen environmentalist, and the founder more than 20 years ago of  one of Uganda’s most reliable tour and travel agents, Bunyonyi Safaris, which has
built up a loyal following over the years.
The firm has unrivalled expertise and can tailor packages for all pockets.
The Kamugisha family’s Bunyonyi Safaris Resort is sited on a hill overlooking the lake and several of its islands. There are 40 spacious self-contained rooms in a main hotel block with Wi-Fi and all the amenities of an up-country hostelry, but many visitors prefer one of the six individual cottages in the terraced gardens of the resort, while there are dormitories for school groups. The facility has a  business centre, a conference centre, and a hilltop arena, which can accommodate functions of up to 1,000
people, overlooking the lake and the distant volcanoes beyond. Some European visitors have commented that the food is not typical
European food – but if your preferences are limited to typical European food, whatever that is, then the best place to look for it 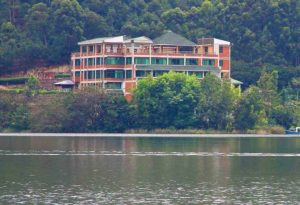 is in Europe. And if you are American, sorry, the Resort’s not on Amtrak.
What the Resort does offer is a wide menu of dishes and snacks featuring fresh bread and pastries, roast rabbit, chicken, goat and pork. But the delicacies that make the visit worthwhile is the crayfish fresh from the lake, the local vegetables and organic fruits, the forest herbs and spices, and herbal teas. Portions sizes tend to be commensurate with Uganda’s
favourite pastime, which is eating.

But if you have over-indulged while being pampered at the lodge, there are
plenty of opportunities for gentle exercise and treatment to get back in shape – there’s a gym, sauna, steam, mountain bikes, and a football
pitch. Or, visitors can swim in the lake and then relax in the sun loungers at the water’s edge. On the water itself, there are boats and canoes, and, if you have booked in advance, you can go gorilla trekking. No need to book,
though for a forest walk or a fitness programme. However the great
advantage of the local knowledge and language proficiency of the Resort team is that they are a treasure trove of  knowledge about the local people and their customs. Tours can be arranged to visit the homes of the Bakiga and the Batwa peoples of the area. Often visitors who do the cultural tours feel motivated to contribute to improving the lives of the people they have met through supporting the Bunyonyi Safaris Resort Foundation.

The BSR Foundation is an initiative by Bunyonyi Safaris which aims to support community projects, conserve the environment and aid in the alleviation of poverty, through the practice of responsible tourism and philanthropy. 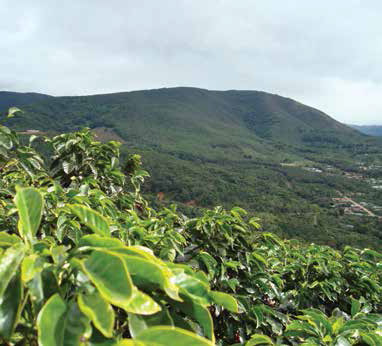 Visitors and guests at Bunyonyi Safaris Resort are given the opportunity
to volunteer their time and skills in various ongoing community projects, or
encouraged to simply visit and experience the lives of the local children and families who live by Lake Bunyonyi.
The Foundation works hand in handwith the Bufuka Orphanage community, which is made up of elderly grandparents who are taking care of orphaned children.
The Foundation provides them with opportunities to make a livelihood through agriculture and farming projects. Donors can support the pig and chicken initiative, which donates livestock to families who do not have much land to farm, so they can make a livelihood by selling the eggs
or breeding and selling piglets to make a living. Another successful project is organic vegetable farming, for which the Foundation recently donated some communal land to be used for growing vegetables. Fresh produce is bought and supplied to the Hotel as well as other hotels around the area, sold in the local markets and also feeds the families. Other projects currently being developed include bee keeping and honey production, tea
and coffee plantation, crayfish farming and tree planting.

The Resort Foundation team says:
“There is so much potential in the region that can be used to catalyse sustainable development. We welcome volunteers of various relevant fields to come visit us and contribute their skills, advice and constructive feedback on any of our projects or even start some of their own. We offer volunteers full board accommodation at a special discounted rate, and an opportunity to experience life around the pristine shores of Lake Bunyonyi, and a chance to positively impact the lives of the surrounding
community.”